Battle For Love During Sleep

On this, or the other, a mysterious night replete with false awakenings I’ve glimpsed in a room a piano of such charming build that it was virtually impossible to turn one’s eyesight away from it. It is hard to say how it found its way there, and why it had seemed so close. But this did not attract my attention, as almost immediately I became overwhelmed by characteristically blissful, childlike feeling of contentedness, allowing me to fully appreciate the power of unexpectedly acquired object. I had to clean it without any haste. Somewhat glued to it, I began to carefully wipe the instrument, when to my astonishment external layer after a while gave way to its proper structure. Underneath, I found astonishing crystal construction, while ideal of coloured music, so often dreamt about by the likes of A. Wallace Remington or Alexander Scriabin, was becoming visible through partially obliterated lacquer. Enchantment and feeling of sublime that accompanied this discovery were not able to be related to the nature of vision itself. Light was shining as if from behind the object, it was even possible to actually hear the light, yet at this time I was not able to fathom all of it. Moments after waking, the room was silent, grey dawn was spread behind the windows, and the black piano was standing beside the bed. From this moment onwards, motive from an archeological dream was continuously coming back to me in various ways. Momentary feeling of loss after awakening grew to such proportions that it was not possible to forget it in several days, while the image in its magnificence began to turn into a stalker [brain worm]. When I have made decision to tolerate this incomprehensible image, I have met Ola Waliszewska and got to know her works. It was one of the more fortunate events that allowed me to understand the power of such images and light emanating from their interiors.

Essentially, my favourite works by Aleksandra speak about encounters. Narrow crevices of understanding between human and animal, wild child artist and monstrous trajectories of gaze, surrounding her from all directions. Similarly to a dream of the very substance of vision, a dream of impossible music of colours, Waliszewska’s works seem to address the recipient with a hypnotic undertone of a warning: “you have to be very cautious, you must be extremely cautious.” But, following this, voice is saying “it is necessary to follow the call of a longing.” Repeated encounter is most important now – thus, we go deeper, following the artist.

It is obvious that all connection between human and nature have been broken long time ago, but before this break-up animals constituted first circle surrounding human being. Today, there is nothing to feel fear about. Parallelism of similarity/dissimilarity between human and animal began to undergo the transformation of a relation. First, animals became machines (just like children in the first stage of the industrial revolution), then in postindustrial societies they were treated as raw material, processed as factory-made goods. Perhaps everything began with a popular tune sung in Victorian revues, “Walking In the zoo is ok thing to do.” Without doubt, animal exodus changed modes of perception, as well as their – and our – images themselves. However, Waliszewska does not attempt to explain anything at all. During first contact, world of her oueuvres constitutes a kind of dark orbis tertius. It is often covered by leaden skies, while sounds of a feast come from the shrubbery nearby. Someone, trying to recover an item of value from the mud, observes too late that s/he got sucked beyond any possibility of help. This parallel world is an ideal zone of transformations and miracles, strangely close to various descriptions of primal time noted by Roger Caillois. Nothing is settled yet, no discernible norms exist, no distinct shape has been established. Everything, that in time became unthinkable, is still possible here. Object move from one place to another by themselves, human beings transform into animals, and animals turn into human beings. Instead of growing old and dying, skins are changed. Whole universe is susceptible to a change, fluid and inexhaustible. Crop is growing by its sheer force, while quartered animal carcasses knit together again. This is why creatures inhabiting Waliszewska’s drawings are so far away from contemporary creations of animal owners, resembling frightening and substanceless tentacleous polyps. Scene often records moments of surprise or jovial suspense created by an emergence of the intruder. Inter-species meetings are depicted in their decisive moments, proceeding without mediation of a language. Narrow abyss of common meaning contained in the gazes informs us anew of the sense of an untranslatable adage entre chien et loup, pointing out that there are infinitely many intermediate stages between animal and human being. Definitely more than small interstice between nature and culture would suggest.

Figurative sense of Waliszewska’s drawing is contained within the composition, an exquisite feeling of abstraction that draws out the uncanny, granting meaning to every gesture or theatrical gaze cast at a viewer. Composition allows revealing male fear of what women can do in secret places within their bodies, fear of witches and alchemists plotting in the darkness behind the closed doors. Waliszewska’s compositions finally allow unchaining creatures from their imposed restrictions, to open the border between dog and wolf, so in a safe moment the distinction itself borders on miraculous. Curious creatures, sometimes naive and grotesque, form a shadow of past fear and symbolic function fulfilled by animals that remain invisible today. Only the presence of an artist impels whole forest to gather again in one place, in order to fix hungry stares on her, to explore consistency and taste of the other body. There is also whole, subtly interspersed, reservoir of visual culture in it, with its bestiary range elements supplemented by goat metamorphoses, cosmic scales of shapeless human meat gourmets or by shadows of historical traumas melted in leaden heavyish outlines. Intimate and silenced encounter scenes sometimes provoke heightened emotional reaction, disagreement for an alleged cruelty and triviality of those images, or on the other hand, affirmation of the extraordinary, enforced by the unmanageable force of the composition. These miracles, as all miracles, referring to Melville, are simply reenactments of what happened ages ago and, one could say, nothing new under the sun. (315-316). But, to the contrary. These are encounters, both of an artist and viewers scrutinizing her, that remain unforgettable, unwanted, marked by the other fantastic world whose laws seem to persuade to dispose of all previous customs and inhibitions. With some degree of stubbornness, these hypnotic images allow us to change an arrangement of features, with phantasmagoria still remaining itself. But an actual state can become for a viewer an informed and disarmed obstacle for thinking. 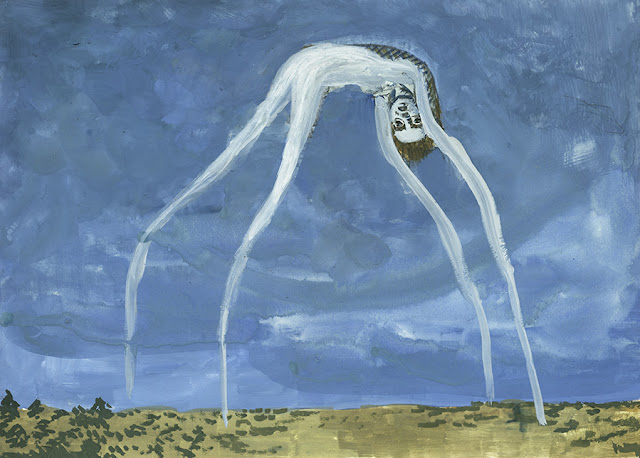